It is the combination of cultural philosophies, practices, and tools that helped to increase our business ability to deliver applications and services at high velocity. By using a DevOps model, we can develop and our operations teams are no longer siloed. But sometimes, these two teams are combined into a single team, with that the engineers work across the entire application lifecycle, from development and test to deployment to operations, and develop a range of skills not limited for a single function. In this blog post we are going to discuss the seven phases of DevOps lifecycle.

It is the amalgamation of development and teams of operations is a business approach, which enables faster development of applications, and it is easy maintenance of existing deployments. Through enabling businesses to design stronger bonds between Dev, Ops and other stakeholders in the company, It promotes shorter, and more controllable iterations by the adoption of best practices, automation and new tools. It is not a technology, but it covers everything from the businesses to culture, processes and tooling. The Initial steps generally include Continuous integration and continuous delivery, and real time monitoring, incident response systems and collaboration platforms.

Its workflow gives a visual overview of the sequence in which the input is provided. And also, it tells about which one action is performed, and output is created for an operations process. Its workflow provides the ability to separate and arrange the jobs that are top requested by the customers, and also it gives the ability to mirror their ideal process in the configuration jobs. DevOps maintains End to End Responsibility and its team is required to provide performance and support until they become the end of life. DevOps enhances the responsibility and the quality of the products engineered.

The world and its industries have transformed by the software and the internet, either it may be shopping, entertainment or banking. The Software no longer merely supports a business instead it becomes an integral component of each and every part of our organizations. The organizations interact with their users through software delivered as online services or applications, and also on all sorts of devices. Organizations also use software for increase in operational efficiency by transforming every part of the value chain, they are like logistics, communications, operations, etc. In the same way that physical goods businesses helped to transformed how they design, build, and deliver products with the help of industrial automation throughout the 20th century, companies in present world need to transform how they design and deliver the software.

In this model of DevOps, the assurance of quality and the teams of security can also turn more tightly integrated with development and operations. And by using the application lifecycle, while security is the focus of everyone on a DevOps team, this is sometimes referred to as DevOps. and The teams found it more useful in practices to automate processes, which  historically have been manual and slow. They use a technology stack and tooling that helps them to operate and evolve applications speedly and reliably, and these tools also help engineers independently accomplish tasks for the deploying code or provisioning infrastructure. Which are normally would have need help from other teams, and this further increases a team’s velocity

DevOps used to describe an agile relationship between operations and Development, which is a process that is practiced by the development team and operational engineers together, that is from beginning to the final stage of the product. The knowledge of DevOps is not complete without understanding the phases of the DevOps lifecycle, that contain seven phases as shown in the following diagram. 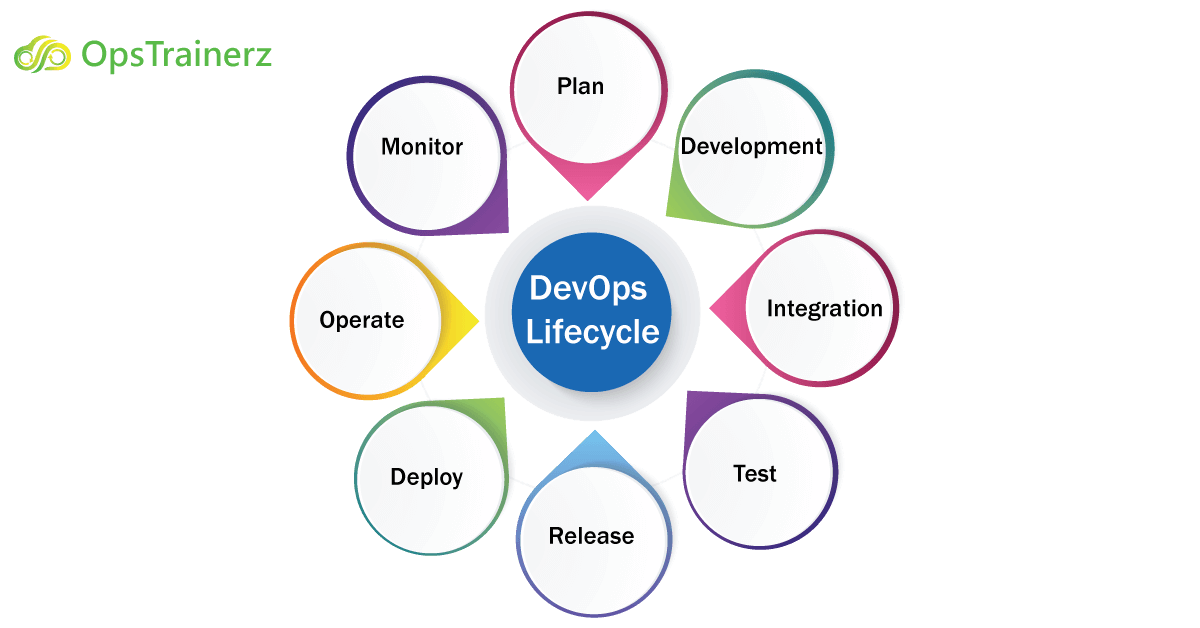 The seven important phases of the DevOps lifecycle are.

This continuous development phase contains the planning and coding of the software, and the vision of the project is selected during the planning phase. developing the code for the application is started by the developers, there are no tools of DevOps, that are required for planning, but there are several tools for maintaining the code.

Want to Discuss on DevOps Technology? Drop your queries at OpsTrainerz DevOps Community

This phase plays an important role as it is the heart of the complete DevOps lifecycle, and the continuous integration is a software development practice, that the developers need to commit changes for the source code more regularly. This phase can be on a daily or weekly basis, and every commit is built, and this provides the early detection of problems when they are present. There is not only the involved compilation of building codes ,and also includes the unit testing, integration testing, code review, and packaging. This building code provides support for the new functionality, that is continuously integrated with the existing code, and there is continuous development of software, and the updated code needs  to be integrated continuously and smoothly, with the help of systems that are used to reflect the changes to the end users.

In DevOps Lifecycle  Jenkins is a famous tool used in this phase, When there is a change in the Git repository, then Jenkins fetches the updated code and creates a build of that code, that is an executable file in the form of war or jar. And  this build is forwarded to the test server or the production server.

The phase where the developed software is continuously testing for bugs, and For constant testing, automation testing tools, like TestNG, JUnit and Selenium are used. These tools allow QAs to test multiple code-bases by using parallel to ensure that there is no flaw in the functionality. In this the Docker Containers may be used for simulating the test environment, and the DevOps LifecycleSelenium does the automation testing, and TestNG produces the reports, the entire testing phase can automate with the help of a Continuous Integration tool named as Jenkins.

This Automation testing saves a lot of time and effort, they are used to execute the tests instead of doing this manually. Except that, the generation of the report is a big plus and the task of evaluation and the test cases which failed in a test suite becomes simpler. Also, we may schedule the execution of the test cases at predefined times, after the testing, the code is continuously integrated with the existing code.

This  is a phase which maintains all the operational factors of the entire DevOps process, and the important information about the use of the software is recorded and carefully processed to find out trends to recognise the problem areas. Generally, the monitoring is integrated within the operational capabilities of the software application.
This can occur in the form of documentation files and can produce large-scale data about the application parameters when it is in a continuous use position. The system errors, they are like server not reachable and low memory are resolved in this phase and maintains the security and availability of the service.

In this phase the development is consistently developed by analyzing the results from the operations of the software. And it is carried out by putting the critical phase of constant feedback between the operations and the development of the next version of the current software application.
This continuity is an important factor in DevOps as it deletes the unnecessary steps that are required to take a software application from development, and uses it to find out its issues and then produce a better version. It leads to the killing of  the efficiency which can be possible with the app and reduce the number of interested customers.

This application is used for the code deployment to the production servers, and it is important to ensure that the code is correctly used on all the servers. In DevOps Lifecycle this new code is deployed continuously, and the configuration management tools play an important role to execute the tasks continuously and speedly. It provides some popular tools that are used in this phase such as Chef, Puppet, Ansible, and SaltStack. The tools of containerization are also playing an important role in the deployment phase, and Vagrant and Docker are popular tools which are used for this purpose.
The tools used to produce consistency across development, staging, testing, and production environments. And they can also help in scaling up and scaling down instances softly. Those tools also help to maintain consistency across the environments, used for the application testing, developing and deployment. It has no chance of errors and failures in the production environment as they package and replicate the similar dependencies and packages that are used in the testing, development, and staging environment. That makes the application easy to run on various computers.

In this phase the DevOps operations are based on the continuity, that the complete automation of the release process and provide the business to accelerate the overall time to market continuingly. This is clear from the discussion that continuity is the critical factor in the DevOps in destroying the steps, which often distract the development, and that there are no longer issues that produce a best version of the product after several months. By using DevOps, we may make any software products, that are more efficient and increase the overall count of interested customers in

DevOps Monitor and test everything and its team needs to have robust monitoring and testing procedures, It works as one team In the DevOps culture and the role of the designers, developers, and testers, which are already defined. And All they are required to do is work as one team with complete collaboration.

It provides a demonstrated methodology, which takes an approach for cloud adoption. DevOps accounts for all the factors needed for successful approval; they are like people, process, technology, etc. And the  resulting in a focus on the following critical consideration. Some models maintenance quality assurance and  teams of security can also become most integrated  along with development and operations by using the application lifecycle.

While the security is the focus of everyone on a DevOps team, then this is sometimes referred  as DevSecOps. DevOps teams use practices, used for  automate processes which historically have been manual and slow. And They use a technology stack and tooling that help them to operate and evolve applications with high speed.